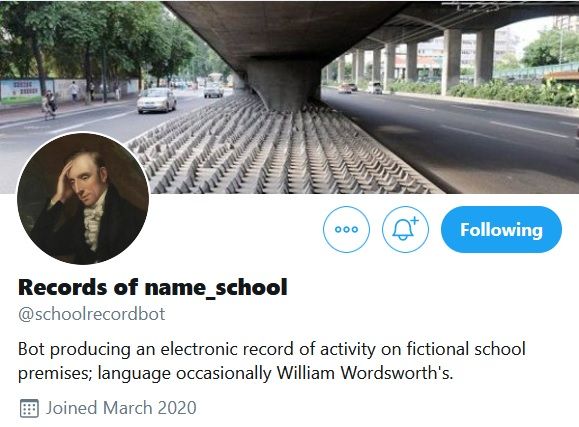 A Twitterbot explores an emerging school surveillance state and the possibilities of imagination and wonder.

Schools have been closed now for months, but every three hours on Twitter, @SchoolRecordBot shares a data entry from the surveillance system on fictional school premises.

The entries are randomly generated through a combination of variables I wrote in early March. @SchoolRecordBot is one of many Twitterbots, Twitter accounts managed by a computer program generating language within certain rules. In my code, the line "Records indicate that #name# is in #place# #status#." has a chance of being posted with the variables "name," "place," and "status" filled in through variable pools to produce a post such as, "Records indicate that Jackson is in Room 206 reading slowly." The statuses were crafted to reflect plausible information a system might track, but the precise combinations of variables are all generated at random on a post-by-post basis. I used Cheap Bots, Done Quick to handle the rest of the work.

Sometimes a record might not be of an active request, but automated such as a May 19th record that "An alert was triggered regarding Ezra's failure to arrive in Room 212." Ezra (a fictional student, whose name was drawn randomly from a pool of 100 popular names) was, seemingly, scheduled to arrive in Room 212 – perhaps for a class or a guidance session – but locational data does not show him having arrived. This is, per the automated system, a cause for concern. Did he ditch class, get sick in the bathroom, get kidnapped? Is he in danger, either from another person or because of some sort of fall? If he is still on the school premises, a request for his present location can find him and sort this out.

These records are all fictional, but the premise is very real. Much is already being done, and some schools are actively fighting to surveil even more. An April 30th report from the @SchoolRecordBot indicates that "Henry has been recorded using the restroom after previously using the restroom 6 minutes ago." This variable entry was inspired by this real-world tweet from September 2019, in which a 5th grade student's behavior was being monitored and quantified through an app, with these young students gaining points through such things as "Teamwork," but losing points for such things as "Restroom during class." Whatever lessons one thinks there is to be learned about the value of class time or bladder management, there is something nightmarish about training young children to understand this not in terms of a personal relationship between themselves and the teacher (a human presence capable of social consideration) but as numerical failing within a lifelong electronic surveillance program.

That view of oppression of children is where William Wordsworth comes in. Throughout his poetry, Wordsworth wrote movingly of childhood, giving life to a then-emerging sense (still felt today) of childhood as a distinct experience. Of his own childhood, he wrote an epic poem, The Prelude, in which he charts the growth of his mind through his major formative moments. The poem, never published in his lifetime, was merely the prelude to a larger project, The Recluse. What Wordsworth needed to understand through his decades of writing and revising The Prelude was how the faculty of imagination – which he himself felt so strongly – was developed, strengthened, and fostered as part of an actively imaginative life.

As Kenneth R. Johnston writes in Wordsworth and The Recluse: The University of the Imagination, this pressing need to better understand the imagination and its origins was not just personal, but necessary for society, to shape a freshly animating spirit by which people could collectively move forward after the French Revolution. Wordsworth's poetic-philosophic project was part of what the philosopher Alfred North Whitehead called "the Romantic reaction" in Science and the Modern World. Wordsworth, Whitehead writes, was moved by a "a moral repulsion" in which, "He felt that something had been left out, and that what had been left out comprised everything that was most important." Today as students are forced through these vast surveillance apparatuses – whether on physical premises or online – a lot of data gets collected about where they are, what they are doing (in a purely productive sense), and the points at which they fall outside of strictly expected behavioral bounds. What, then, gets left out in our present context?

Occasionally, amid the plain-stated records of student activity, @SchoolRecordBot will record something which falls outside of the usual bounds of real-world systems. Instead of just using the restroom too frequently or not paying attention in class, sometimes the rich, imaginative inner life of these students is recorded, even as the over-arching system would seek to grind away these moments of wonder.

The language for all of these moments is taken directly from William Wordsworth's poetry, both from the language he uses to describe himself and the language he uses to describe other vulnerable people forgotten on the peripheries of society. The names, however, are replaced with the popular names of today. On April 28th, "Lila wandered lonely as a cloud that floats on high o'er vales and hills." More recently, on May 19th, it was recorded that "Camilia yearns towards some philosophic Song of Truth that cherishes our daily life." These are, like the reports above, fictional.

It is not that children do not feel as deeply as Wordsworth – or aspire to feel as deeply as Wordsworth aspired, through his dramatic poetic production, to feel. Our systems of active surviellance and online data procurement do not value such feeling. In resituating these lines in context of the lives and names of children today, I developed for myself a way of thinking through what it is that is presently lost.

If, like Wordsworth, we want to better understand the imagination, we can have a New Romanticism, a new Romantic rebellion. We can also learn from the work he, as one of our most prominent precursor poets, already did.

To learn more about Wordsworth, the imagination, Twitterbots, surveillance, and childhood in the 21st century, subscribe to my free monthly newsletter. I bring together the latest and greatest of my own writing, new literature, literary history, and a curated selection of other sources around the web. Sign up now and I will also be sending out an invite to a free mini-course delivered via email soon: