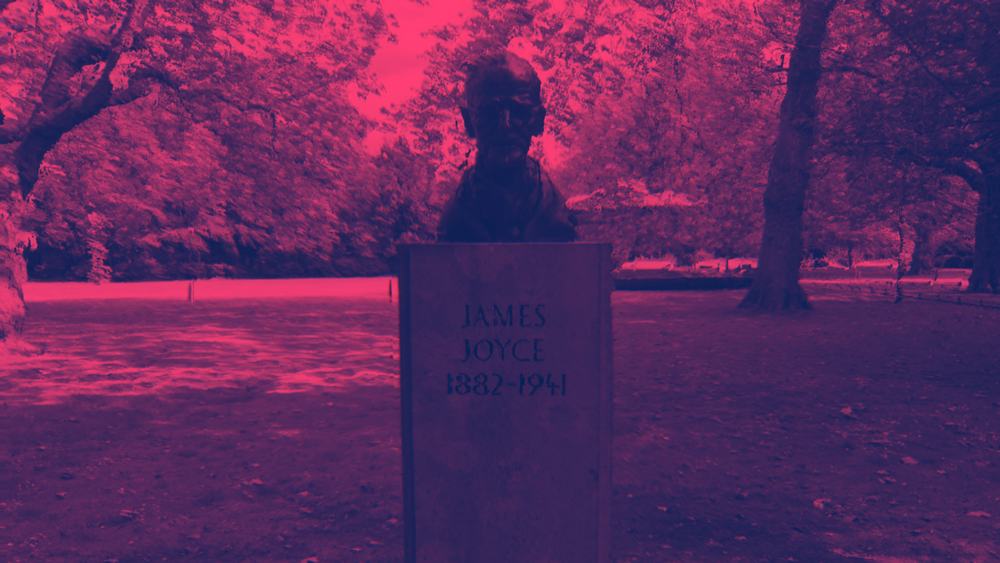 The post below is about Bloomsday, the literary holiday set on June 16 in commemoration of the setting of James Joyce's novel, Ulysses, which is in turn the date on which Joyce had his first outing with Nora Barnacle. For those in New York City, I am organizing a live, distributed reading of the entirety of Finnegans Wake. Please consider wandering around and listening to various parts.

This post is most immediately about the question, Why celebrate Bloomsday? But perhaps an important prior question is, How serious was James Joyce about Finnegans Wake anyway? After all, why make a big literary holiday out of someone who was having a laugh to himself, duping over-serious readers into wasting seventeen years scrutinizing nonsense. Finnegans Wake, though, is a deadly serious project.

Finnegans Wake is a book about being saved by writing. In its density, it functions as something of a preservation machine: history, folklore, literature, dozens of languages, etc.

With his previous novel, Ulysses, Joyce commented that if Dublin "one day suddenly disappeared from the Earth it could be reconstructed out of my book." Taking nearly a decade longer to write than Ulysses’ seven years, Finnegans Wake is, in part, an attempt to achieve the same for himself and his beloved Nora Barnacle.

The novel begins and ends with the loss of a James figure and Nora figure, respectively – except it doesn’t really begin or end. It’s more that the format of the book – as available to Joyce in the early 20th century – offered readers a comfortable, reliable entry point, and a point at which to conclude. One of the most well-known facts of the novel, however, is that its final line (an unfinished sentence) links back to the first (beginning in lowercase):

There's where. First. We pass through grass behush the bush to. Whish! A gull. Gulls. Far calls. Coming, far! End here. Us then. Finn, again! Take. Bussoftlhee, mememormee! Till thousendsthee. Lps. The keys to. Given! A way a lone a last a loved a long the

riverrun, past Eve and Adam's, from swerve of shore to bend of bay, brings us by a commodius vicus of recirculation back to Howth Castle and Environs.

But this only function as one continuous sentence within the method Joyce applies throughout the novel of ill-define boundaries between speakers. Even when a passage is relatively well-defined as a particular character speaking, the whole thing remains in the portmanteau-heavy dream language of Joyce’s book of the night.

In the final passage, dawn is breaking. Anna Livia (at times representing Nora, and to be primarily referred to as her rhythmic shorthand "ALP" through the rest of this essay) is the first to awake. She speaks out in pain and fear:

But I'm loothing them that's here and all I lothe. Loonely in me loneness. For all their faults. I am passing out. O bitter ending! I'll slip away before they're up. They'll never see. Nor know. Nor miss me.

She is a lunatic in loneliness, "passing out" (from the dream and life, while waking up) and worried this loss will pass unseen and unfelt among her husband (Finnegan / HCE), her sons (Shem and Shaun), and her daughter (Issy). Then as she drifts fully away in the closing lines, pleading to remember me ("mememormee"), she hangs on one last hope: "Finn, again! Take. ... The keys to. Given!"

She doesn’t need to command Finnegan to take the keys to [her heart]. As she exclaims, they’re already given! But where? How? When? "A way a lone a last a loved a long the"

We begin with a nod to ALP – the river (Anna) Liffey making its way through Dublin – but this is not in any straightforward sense a continuation of her monologue. We have also jumped from the dawn to (a previous? the same? another?) dusk.

After a narrative overview of the geographic, historical, literary, mythological, (and so on and so on) context, we close in on Finnegan. A Humpty Dumpty figure, he is building a wall and falls, and at his wake he wakes, but is told he is better staying gone, while at that moment another iteration of him as HCE (the everyman, "Here Comes Everybody") arrives in Dublin.

There’s one big problem with this everyman. Just as we ran “past Eve and Adam’s,” this man is a fallen being. There are rumors that he did something unseemly with two women in Phoenix Park, but the rumors are constantly changing. When brought to trial, what saves him is a letter from ALP – found by a hen in a dump for biological waste.

When all is brought to waste, ALP in turn can be saved by finding a single copy of Finnegans Wake, and reading back for the given key.

A core part of the novel’s system of endless cycles is that the two generations of the family are continually replacing one another. This is the curse and gift of Eve for eating the forbidden fruit in the garden of Eden: now she must eventually die, and suffer the pains of childbirth – but she gets to have children, down through thousands ("Till thousendsthee") of generations. In this way, she is not just the singular Anna Livia, but Anna Livia Plurabelle ("Anna was, Livia is, Plurabelle's to be").

We can see the blooming of her love in her younger self – that is, in Issy ("Livia is").

In Book II, Chapter 2, the three kids are upstairs doing homework while the parents are drinking below. Shem and Shaun occupy the margins of the page as a pair of glosses, while Issy comes in as a series of footnotes. One page has just one footnote, which takes up the majority of the page. Most of her footnotes (like the glosses) are brief lines of interjection ("Hen's bens, are we soddy we missiled her?"), but here we get Issy speaking at length.

A major through-line of the passage is Issy thinking about her "Impending marriage" (stated plainly) and her studies. Later in the chapter, Shem and Shaun fall into sexual knowledge (explained at length in my previous Bloomsday post, "Always Again Another Bloomsday"), but Issy already "learned all the runes of the gamest game ever" from her old nurse, "A most adventuring trot." She takes comfort in the shared fallen nature of others:

I was thinking fairly killing times of putting an end to myself and my malody, when I remembered all your pupilteacher's erringnesses in perfection class.

From this perspective, she then declares,

If it's me chews to swallow all you saidn't you can eat my words for it as sure as there's a key in my kiss.

Joyce's design sets up the two-way decision of "If it's my choice" and "If it's me, choose." The key is in her kiss, but her words can also be eaten. At the end of the very same line as the kiss, she goes on, "When we will conjugate," referring to both the sexual act and the grammar work being done. Eve eats first of the apple, then convinces Adam to join her, and he chooses to do so. He eats her words, and her letter saves him.

The Fall comes up again in relation to Issy toward the end of the novel, just before ALP's passing out. ALP knows that she is not so much leaving as being replaced in a continual cycle, just as she was born of her own mother and had her life:

I pity your oldself I was used to. Now a younger's there. Try not to part! Be happy, dear ones! May I be wrong! For she'll be sweet for you as I was sweet when I came down out of me mother. My great blue bedroom, the air so quiet, scarce a cloud. In peace and silence. I could have stayed up there for always only. It's something fails us. First we feel. Then we fall. And let her rain now if she likes. Gently or strongly as she likes.

At the start here, we see ALP reflecting on the "oldself" being replace with "a younger," who will serve the role that she served. She then remembers her birth – being born with original sin, with the Fall being also the physical falling out of her peaceful home inside her mother.

The original sin is not a meaningless fact of life, though; it is an inevitable failing, in the introduction of our postlapsarian feeling. Keeping with the Romantic notion of the "happy Fall," though, Joyce sees the complexities of human feeling as something ultimately to be celebrated. As Whitman puts it, losing Paradise is worth it for that "one hour of fulness and freedom," that "one brief hour of madness and joy" that is life – in which, rather than living eternally, we get to "bequeath" our "savage and tender achings" to future generations.

The gentleness and extremes of Issy's emotions – her melody/malady ("malody") – are presented as the rainstorm: falling, but feeding back into the river (ALP), which she will become, as part of an endless water cycle that will soon lead back to the evaporation of water into the sky ("My great blue bedroom"). Through Finnegans Wake, we get to loop back through this cycle literarily, and see – through both ALP and Issy – commitments to love their fallen Adams, just as the everyman HCE loves his fallen Eve.

The key in her kiss comes back again in the closing lines through the sounds of the water. Just before exclaiming "The keys to. Given!", we hear a "Lps." The crashing of the water – the running of the river – is also "Lips," the mouth of the river where it passes out into Dublin Bay, near Howth Castle and environs. Then, therein comes HCE, rumored to have committed many follies. "Lps" is also a "lapse," but it is through this lapse that the key is given.

There is a joke in Oscar Wilde's The Picture of Dorian Gray that "To get back one's youth, one has merely to repeat one's follies." Joyce takes this as a structuring principle in Finnegans Wake.

Like Eve, ALP knows too much – in particular about HCE, and what he may or may not have done. Also like Eve, ALP must learn to live as a postlapsarian being and, hand in hand with HCE, take their solitary way. She is "Loonely in me loneness," but not quite alone. Through their union, she is "a way a lone a last," but also "a loved a long the."

Eve is not only loved by Adam, but the recompense for the introduction of death is becoming Plurabelle. Finnegans Wake follows the endless cycle of Eves and Adams through history, languages, literary manifestations, and more – not least of which is the autobiographic imprint from Joyce's own life.

Just as Joyce combines "funeral" and "fun-for-all" as "funferall" in his opening chapter, Bloomsday offers a positive spin on an endless cycle of Doomsday scenarios. It only asks that you be willing to give, and to find the key in a work so full of faults, he misspelled nearly all the words!

If you don't have seventeen years to spare for Finnegans Wake, that's alright. The book will be there. Just uphold the promise of the Plurabelles to be. Then, in case of Bloomsday scenario, search a long the