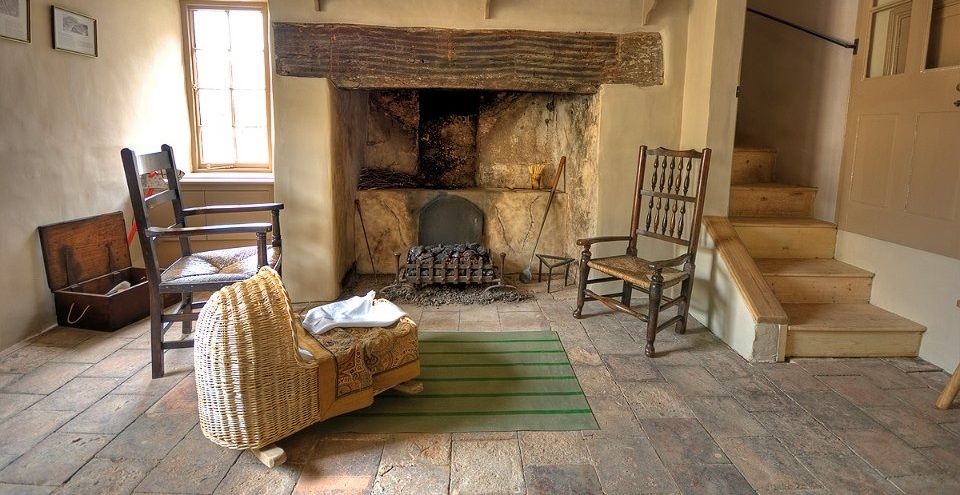 Three glimpses into Romantic poet Samuel Taylor Coleridge's cottage in the late 1790s show us instead a vision of future generations.

Coleridge published many poems in 1796, but particularly interesting are the two which critics group as the first of his "conversation poems." "The Eolian Harp" was first published as "Effusion XXXV," a classification placing himself directly at odds with an earlier poet (William Bowles), with Coleridge here embracing a form of unrestrained, flowing expression. The other poem, "Reflections on Having Left a Place of Retirement," had been originally subtitled "A poem Which Affects Not to be Poetry," yet these poems were influential in forming a wider use of blank verse in the era within poems of conversational style and personal content. What is non-standard at one moment becomes the standard of the next through force of Coleridge's active poetic craft.

Coleridge's vision in these poems is similarly forward-looking. Responding to criticism of his work in Poems on Various Subjects – which contains his effusions – he replied:

my religious poetry interests the religious, who read it with rapture – why? because it awakes in them all the associations connected with a love of future existence.

For Coleridge, his writing on nature and giving thanks for the pleasures he has personally experienced is not solely personal, but also connected outward to society. This will be clear within the individual poetic examples, but was also part of the wider activity of Coleridge at this time.

Since 1794, he had been in talks with fellow poet Robert Southey about the idea of crossing over from England to the United States to establish an egalitarian community on the banks of the Susquehanna River. They called this Pantisocracy, equal government by and for all. Coleridge makes this context clear in his preface to his 1796 Poems, in which Southey co-wrote one of the effusions:

Some of the verses allude to an intended emigration to America on the scheme of an abandonment of individual property.

Rather than focus on those allusions, however, we will look at some of Coleridge's more religious moments.

"The Eolian Harp" is structured around Coleridge sitting with his wife-to-be Sara beside their cottage. The poem is filled with references to Paradise, Eden, and Eve, drawing textually from John Milton's epic poem on the Fall of Adam and Eve, Paradise Lost. On the surface, the story of Adam and Eve is tragic (bringing death into the world, and the pains of childbirth), but in doing so it also brings the promise of successive generations. Coleridge is not yet in this poem thinking in those terms, but he does have his Eve who provides for his musings a valuable check.

In the window of his nearby cottage is an Aeolian harp, an instrument played not by man but by wind. "Like some coy Maid half-yielding to her Lover," the harp does not fully submit to the wind, but only partly, converting that natural force into a melody. Coleridge then places himself into a similar liminal state:

Whilst thro' my half-clos'd eyelids I behold
The sunbeams dance, like diamonds, on the main,
And tranquil muse upon tranquillity;

With eyes half-closed, he neither fully sees nor is fully blinded to the sight in front of him. From this perspective, he is able to see the sunbeams "dance" – a pleasant though non-literal (personifying) image. The parallel structure of him tranquil musing upon tranquility furthers this moment of harmony between himself and nature, though it is not just with nature. His thoughts here are shaped by the human invention, the Aeolian harp, which may seem a fitting metaphor but is not in itself a fundamental truth. Such figurative language, however, can nonetheless help shape our thoughts, and so he compares thoughts traversing his brain to gales fluttering on the lute.

Just as Coleridge begins to get too swept up in this metaphor – wondering wildly "what if all of animated nature / Be but organic Harps diversly fram'd" – Sara's "more serious eye" offers "a mild reproof." She does not reject his thoughts or the general activity of the ever-babbling spring of "vain Philosophy," but humbles him,

For never guiltless may I speak of Him,
Th' INCOMPREHENSIBLE! save when with awe
I praise him, and with Faith that inly feels

He concludes with thanks for God not only healing him of his misery, but giving him three things: the companionship of Sara, the comfort of his cottage, and a more general sense of peace. This sense of personal growth and Coleridge's religious attributions are key for the other two poems to be discussed. As a last note on this poem, Coleridge emphasizes his sense of "Faith that inly feels." Even if the harp is an imperfect metaphor, it appealed to him for a reason.  His experience of Faith is not an abstract thought; instead, the world acts upon him to create internal feeling which manifests as like the sweet melody of the harp.

In "Reflections on Having Left a Place of Retirement," written the year after "The Eolian Harp," Coleridge has already articulated how much he values his life at the cottage. Here he exclaims, "It was a luxury,—to be!" He is overcome, though, by a sense that he must leave this place and go pursue more direct social change:

I therefore go, and join head, heart, and hand,
Active and firm, to fight the bloodless fight
Of Science, Freedom, and the Truth in Christ.

The poem, however, is not debating leaving, but reflections on having left. What are his thoughts, then, in reflection? He thinks again fondly of his life at the cottage, and wishes "that all had such!" Were that the case, he thinks, "It might be so—but the time is not yet." This sentiment reflects his clearer ambition for Pantisocracy. As Clarke Garrett writes, Coleridge insisted

To Coleridge, no amount of theory or effort would fully achieve this goal of true freedom and virtue. Such sense is shaped by that which we inly feel through our upbringing. This is why two years later, in his poem "Frost at Midnight," Coleridge is now back in a place of solitude. He now has an infant child, Hartley, who is sleeping peacefully by his side, leaving Coleridge free to muse. He thinks briefly on his own childhood, which he notes was "In the great city, pent 'mid cloisters dim," and compares this to what awaits his own child:

But thou, my babe! shalt wander like a breeze
By lakes and sandy shores, beneath the crags
Of ancient mountain, and beneath the clouds,
Which image in their bulk both lakes and shores
And mountain crags: so shalt thou see and hear
The lovely shapes and sounds intelligible
Of that eternal language, which thy God
Utters, who from eternity doth teach
Himself in all, and all things in himself.
Great universal Teacher! he shall mould
Thy spirit, and by giving make it ask.

Coleridge enjoyed such scenes through fresh eyes as an adult, and is assured that the effect will be far greater if experienced from infancy. These scenes will shape for Hartley stronger senses of feeling and wonder. Being enacted on by these "shapes and sounds," as the wind acts upon the harp, he will more innately feel that sense of unity which Coleridge felt. The metaphor, again though, is imperfect. Hartley is not a passive object through which music is created. God will mold his spirit, but Hartley will then be free to ask things of the world.

In these poems, Coleridge is reflective and thankful, but also forward-looking. Whether you support the tenets of Pantisocracy or not, you can learn much from Coleridge's "love of future existence." He was not merely shaping a personal narrative here. He saw himself as shaping the future of society.

To learn more about Coleridge, religious poetry, tranquil musing, and the fight for future existence (in the Romantic era, and for the 21st century), subscribe to my free monthly newsletter. I bring together the latest and greatest of my own writing, new literature, literary history, and a curated selection of other sources around the web. Sign up now and I will also be sending out an invite to a free mini-course delivered via email soon: