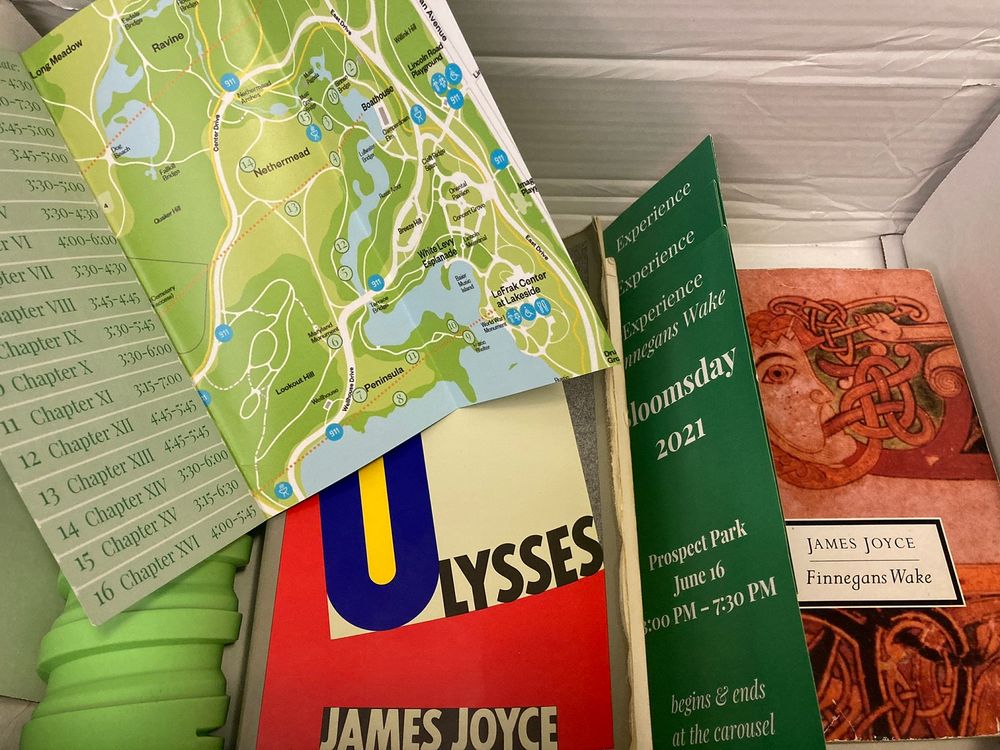 Bloomsday is a literary holiday set on June 16, celebrating the life and work of James Joyce. If you want to know more, I wrote an explainer last June. That post follows a narrative thread from Finnegans Wake, though Bloomsday is technically based on the setting of Ulysses, for which 2022 is the centennial.

Last year, I organized a celebration of Bloomsday in New York. If you will be nearby on June 11, join me for this year's event. If you're anywhere else, read on for why and how you might organize a Bloomsday celebration in your area.

Bloomsday and the Fight for Literature

Ulysses is a novel which deeply rewards sustained, solitary reading. Besides being full of allusions and lines like "Limit of the diaphane in. Why in? Diaphane, adiaphane," Joyce plays with punctuation. The most famous example is the minimally punctuated final chapter, featuring the lone monologue of Molly Bloom—yet right before this, what becomes of Stephen Dedalus, another core character and the central figure of A Portrait of the Artist as a Young Man? This is left unanswered, save by a big dot.

Interpret that as you may.

Finnegans Wake goes much further in adding depth not just to each word, but each syllable, crossing over dozens of languages and references incessantly. That novel begins, "riverrun, past Eve and Adam's, from swerve of shore to bend of bay, brings us by a commodius vicus of recirculation back to Howth Castle and Environs." Finnegans Wake was a work-in-progress for seventeen years, with sections released along the way. Many people reacted quite strongly to the samples, of course—and so Samuel Beckett offered a defense of the project. One interesting comment he makes:

One of the conceptual challenges of Finnegans Wake is it is very much a product of writing. The work would not come together through sound alone; you need to be able to see the spellings and structures which introduce new meanings. At the same time, looking at it will only get you so far. The work also has to be listened to. As Beckett boldly declares, "It is not written," but rather, it is something out in the world. The artifact of the book is one side, but the work demands more.

Only through public, social reading is Finnegans Wake—and in a similar way, Ulysses—fully realized in its literary project. This is to say that just at the moment that Joyce is pushing the limits of our textual, solitary reading practices which had bloomed tremendously over the 19th century, he is also reinforcing that maximum literary depth requires retaining elements of literature's oral traditions. With this in mind, Ulysses is modeled on Homer's Odyssey and Finnegans Wake on ballads.

There is a famous remark—often recalled to position Joyce as a bit of a trickster—that Finnegans Wake took him seventeen years to write and should take people seventeen years to read. For the scholars who can do so, that is real treat—truly. For the rest of us, Joyce's works can be experienced in much less time.

We must not let this opportunity pass us. Bloomsday is a fantastic opportunity to keep alive some of the great potentials of literature. This is why, failing to find a good reading for Bloomsday last year, I rushed to set-up my own, and why you should consider doing so as well.

How to Read Ulysses in Three Hours

There are many guides to reading Ulysses. The new book of annotations from Oxford University Press is 1,424 pages. This is on the longer end, but the typical guide either takes this form of exhaustive reading or is a document designed to enable not-reading.

Here, I am taking a different path. I strongly encourage you to read Ulysses. In particular, I suggest that you stand in one place and read out loud from it for twenty minutes to an hour, then pass the book along and listen—though you might also power through a chapter on your own. My proposal below, however, will get you through the novel in three hours.

How can this be possible? In this case, part of the proposal is selective reading, but another element is parallel reading streams. Last year, with the help of 17 other readers, we got through Finnegans Wake in four hours. Spread across a 0.7 mile stretch of park space, we read through chapters in slightly staggered, but overlapping sessions. For 2022, I recommend splitting three chapters of Ulysses across just two reading streams and keeping these reading locations much closer together.

The opening words of Ulysses—"Stately, plump Buck Mulligan"—introduce, on the surface, an ultimately minor character, with a more subtle nod to the work's three main characters: Stephen, Leopold "Poldy" Bloom, and Molly Bloom. The starting letters of their names greet us in this opening line. In a similar move of expansion and contraction, we will move quickly through each of their stories with a reading of one representative chapter each:

1) Episode III: Proteus gives us such a thorough introduction to Joyce's overthinking self-insert Stephen Dedalus that it is likely the most common point at which people who give up on the novel stop reading. This chapter begins:

Ineluctable modality of the visible: at least that if no more, thought through my eyes. Signatures of all things I am here to read, seaspawn and seawrack, the nearing tide, that rusty boot. Snotgreen, bluesilver, rust: coloured signs. Limits of the diaphane. But he adds: in bodies.

2) Episode XI: Sirens gives us a strong sense of Leopold Bloom with all his lust and gluttony and farting, as well as his achingly intense appreciation for beauty such as in the musical performances which accompany his meal. Leopold captures well Joyce's sense of the sorrow and greatness of fallen man:

Through the hush of air a voice sang to them, low, not rain, not leaves in murmur, like no voice of strings of reeds or whatdoyoucallthem dulcimers, touching their still ears with words, still hearts of their each his remembered lives. Good, good to hear: sorrow from them each seemed to from both depart when first they heard. When first they saw, lost Richie, Poldy, mercy of beauty, heard from a person wouldn’t expect it in the least, her first merciful lovesoft oftloved word.

3) Episode XVIII: Penelope finally brings in the voice of Molly Bloom, who has been off at home during the story's travels, both having some fun and feeling some grief of her own. Joyce's fallen woman, Molly's outpouring is relentless, but must eventually arrive at a renewed sense of love and hope:

and then I asked him with my eyes to ask again yes and then he asked me would I yes to say yes my mountain flower and first I put my arms around him yes and drew him down to me so he could feel my breasts all perfume yes and his heart was going like mad and yes I said yes I will Yes.

In Case of Bloomsday Scenario

On Bloomsday (or, like me, the preceding weekend), make plans to go and read out loud in a park or other nice space.

For a solo Bloomsday, you might try reading any one of the above chapters yourself and spending this year immersing yourself deep in that one character. For the full 2022 Bloomsday experience, however, try to gather:

Stephen and Leopold's stories occupy one reading stream (the streets of Dublin), while Molly's occupies another (the home across the novel's figurative sea). To make sure people can experience a bit of both streams, try to approximate this staggered schedule, shifting times to whenever in the day makes sense for you:

This is not an exhaustive, scholarly reading—but it will get you through the heart of the novel. Then, there will be more of the text waiting for us next year. There is always again another Bloomsday. 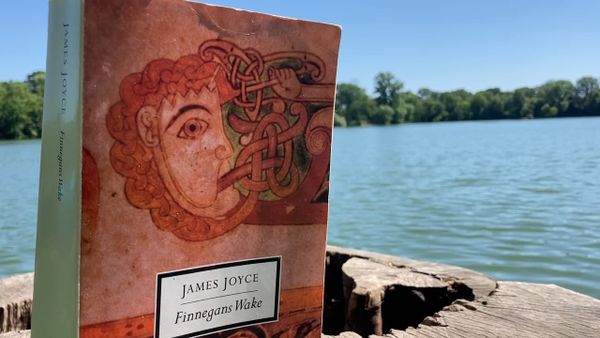