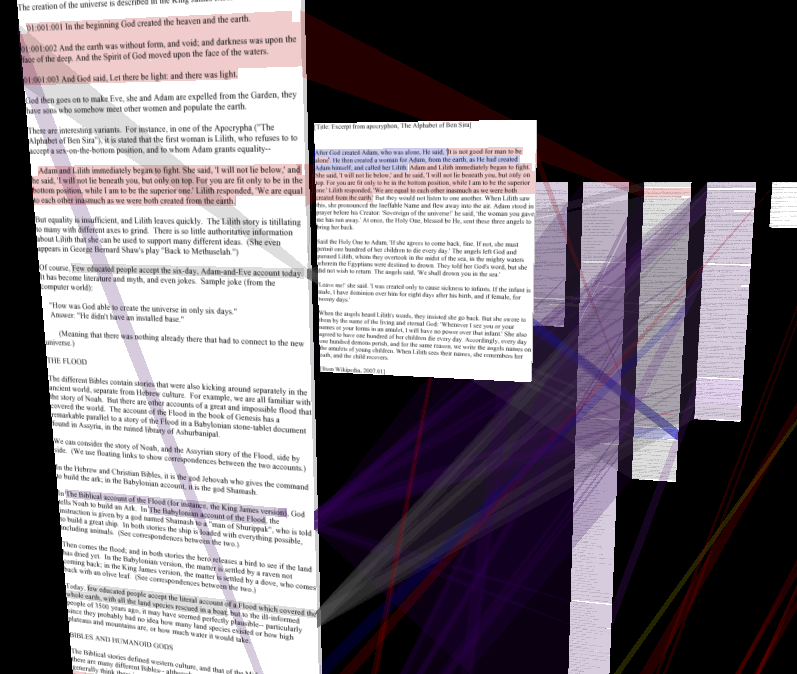 At the start of this month, I sent out "Anti-Text Revolution." April Fools' is a fun opportunity to play with expectations. Of course I support literacy, and ultimately make the case there for the need to support an exceptionally high level of reading comprehension – and yet, O!, what all must we contend with for eating from that apple.

As I note there, literacy began to rise substantially during the Romantic era, and Wordsworth wrote to "Close up these barren leaves." In another poem from the same collection, he writes:

Then come, my sister! come, I pray,
With speed put on your woodland dress,
And bring no book; for this one day
We'll give to idleness.

And as people would read this out to their families, all the children would cry out, "RETVRN! RETVRN!" and they would weep. They, alas, could read, and knew full well they are not seven in all.

Escaping the Cycles of Reading

Notably, as Wordsworth understood it, in going out in idleness through the woods, he and his sister were not so much learning from nature as much as nature would serve as a guide. The mind would interface with this world, and half-create. Wordsworth, though, was widely read:

All this is important, even as he champions the idea of poetic genius. Looking more closely at the passage above, he asks only to give "this one day" to idleness. At other times, you may benefit from bringing a book.

Still, you might look at the endless proliferation of books – and the need to read continually outward and inward through vast webs – as a bit of a scam:

Walt Whitman got caught up in a related obsession, as suggested by his notes in his personal copy of his regularly revised and expanded book, Leaves of Grass:

The complicated dynamic of escape is that you need to understand those earlier models so that you may usurp them; yet, in reading those models, they shape your mind. Wordsworth's confidence came, in part, from seeing his poetic duty not to do what others did but better – but to apply all this to advance his society and the art. Wordsworth wrote that a "great and original writer ... must himself create the taste by which he is to be relished." Wordsworth in particular needed to do so in support of lofty goals:

This was to be worked on in collaboration with Samuel Taylor Coleridge, who was not quite the great poetic genius, but could provide the philosophic core.

Elsewhere in England, William Blake was going to further extremes to create the taste for his idiosyncratic work. In Jerusalem: The Emanation of the Giant Albion, he writes something similar to Wordsworth's plea to (temporarily) close up barren leaves:

I must Create a System, or be enslav'd by another Mans
I will not Reason & Compare: my business is to Create

This sentiment found renewed interest in the computer revolution. Though the history by now has often been the creation of systems with which we are forced to contend, the promise was (and continues to be) the possibility of more intently crafted systems, literally unbound.

The New Home of the Human Race

In 1960, Ted Nelson conceived of a computer network which would rapidly connect people everywhere to the vast history of human knowledge, and to each other as they expand on this web of interconnections. For the name of this project, he realized, "because it means the magic place of literary memory, it has to be called Xanadu."

Nelson's title is a reference to Coleridge's poem "Kubla Khan." "In Xanadu," Coleridge begins, "did Kubla Khan / A stately pleasure-dome decree." He goes on for 54 more lines, but only 54 more lines. In his dream, Coleridge contends, he "could not have composed less than from two to three hundred lines." The rest were lost when Coleridge was interrupted, and it is Nelson's dream that new technology can form a more perfect literary memory. Central to this is text, and the connections between texts.

In 2010, Nelson published an autobiography, Possiplex, with a long-winded subtitle which hints at the scope of his vision: Movies, Intellect, Creative Control, My Computer Life and the Fight for Civilization. The escalation in that last bit is what is most exciting about Nelson's work. As he consistently tries to make clear, what may seem like petty squabbles about interfaces or network structures are actually about the fate of civilization.

A particularly memorable instance of Nelson's commitment to real, meaningful work which will improve humanity's future is in a section of Possiplex titled "Snubbing Apple, ca. 1977":

I kept hearing ... that 'those guys at Apple want you to come and talk.'

I asked, 'Does their computer have lower case?'

No, said my partners.

At the heart of "Anti-Text Revolution" is this same terrifying realization: the future really is all about text.

As Percy Bysshe Shelley wrote in "A Defense of Poetry" in 1821, "poets are the unacknowledged legislators of the world." The thing is, though, poetry is hard, and there is a lot of it, and poets keep writing new legislation!

Further complicating matters is the inevitable fact that, increasingly, that legislation will involve elements of digital composition. Those poets, like Blake, will not Reason & Compare; they will create.

Instead of RETVRNing to illiteracy, we can simply win.

Instead of seeking "no consciousness," we must seek "infinite consciousness," what I called "eve/acc" at the start of this year. Nelson sought this perfection of literary memory through Xanadu, and this profoundly Romantic goal is still possible.

Header image: a still from a demo of XanaduSpace.

If you would like to learn more about Romantic poetry's acts of philosophic rebellion, I am hosting a two-hour discussion on the Romantic reaction on Wednesday, May 19th at 5 PM EST. I would be thrilled to see some of you there. I also send out a monthly newsletter connecting classic literature, new literature, and electronic literature: